Pesto Salmon
Summer5 December 2012 22:04
Tonight we had another dish from Annabel Langbein which I tried for the first time. I do like her recipes and cook from them a lot, but I seem to be having a particularly Annabel Langbein influenced week! It was, once again, delicious, quick and easy, and everyone gobbled it up. It was Flash Roasted Pesto Salmon http://www.annabel-langbein.com/cooking/recipes/recipe/?id=442 and we had it with boiled new potatoes (which I love!) and lightly stir fried courgettes, beans and roasted red peppers. Delicious. It would probably also work well with rice and green veges (spinach?) which I often do with salmon when I'm running short on time. Yum.
No comments:

Email ThisBlogThis!Share to TwitterShare to FacebookShare to Pinterest
Labels: Fish, Salmon, SUMMER
Red Pepper Fish
Summer4 December 2012 14:32
Well, this is the first time I have posted here, but I just had to share what we had for dinner last night. It was SOOO delish and quick and easy. The kids gobbled it up, as did we. Annabel Langbein's Great Food for Busy Lives often saves me when I can't think of what to cook. We had this: CLICK HERE with boiled new potatoes. Yum yum yum is all I can say. I recommend trying it!
2 comments:

I have been searching for recipes with broad beans in them as we have an abundant supply in the garden this year and I don't really like them! This falafel was really delicious, although a little crumbly. I blended together chickpeas, broad beans (tough skin removed), onion, garlic, ground cumin, ground coriander, handful of fresh coriander and parsley and salt then rolled into balls and baked in the oven. I don't think baking them was the best option as they kind of just fell apart but still tasted yum. Served with minted yoghurt and homemade hummus in pita pockets.
No comments:

Email ThisBlogThis!Share to TwitterShare to FacebookShare to Pinterest
Labels: Broad beans, Chickpeas, HANNAH V
Lentil Lasagne
Alex16 November 2012 05:52
Last night we had lentil lasagne and broccoli. We have this frequently - more often in its deconstructed form as lentils and pasta (when I can't be bothered with / don't have time for making white sauce!). Its contents vary according to what veg I have in the fridge, but last night included a courgette and a carrot chopped up with the lentil mix. The lentils I use are red, which don't need soaking, but do benefit from a good rinse. I start with onion, garlic and spices (usually ground cinnamon, cumin and coriander - last night went a bit heavy with the cinnamon, so it was a bit sweeter than usual, but nice) in some oil, add the lentils and veg, a can of chopped tomatoes, simmer for about 20 mins while I make the white sauce.
Thankfully, both kids are more than happy to eat lentils - in fact they prefer them to any meat - so I can get away with making this as often as I do!
No comments:

Email ThisBlogThis!Share to TwitterShare to FacebookShare to Pinterest
Labels: ALEX, Lasagne, Lentils
Meatballs
Angela9 November 2012 15:45
Last night we had meatballs and hid veges in them - tiny tiny bits of broccoli, onion, garlic and grated zucchini. Esther really likes eating sausage, and eats happily with her fingers, so I thought this would be an easy way to get a balanced meal in to her. I made the meatballs slightly elongated as well, to make them easy for her to hold. I also did risone, which is great for both kids, with pasta sauce and corn. Esther pretty much ate this with her fingers as well.
No comments:

Last night we had beef and eggplant casserole for the third night running. It's been a challenging week with sick kids so I cooked up a big casserole on tuesday and we have eaten it every night since. I knew it would be a struggle to get the same dinner into the family for the third night running without working some magic so I made some parsley and parmesan dumplings to go on top. Butter, flour, LOT's of parmesan cheese and parsley, and a little bit of milk to bring it together. Rolled into balls and placed on top of the casserole and baked in the oven. It was the tastiest of the three nights!
No comments:

Big Pop4 October 2012 22:56
Salmon, asparagus and poached egg on toast. Should have made a benedict sauce to top it off.
3 comments:

Email ThisBlogThis!Share to TwitterShare to FacebookShare to Pinterest
Labels: BIGPOP, Eggs, Salmon
Parsley pesto with spaghetti
Hannah V28 September 2012 21:22
Last night we had Parsley Pesto with spaghetti. This is what I make when I can't be bothered cooking. Cashews and garlic in the blender with HEAPS of parsley, parmesan, lemon juice, olive oil and salt and pepper. Stir through hot pasta and sprinkle with more parmesan. Leftover pesto will keeps well in the fridge.
1 comment:

Email ThisBlogThis!Share to TwitterShare to FacebookShare to Pinterest
Labels: HANNAH V, Pasta, Pesto
Chicken mince noodles
Lara Aldred28 September 2012 21:14
Last night we had a super yummy and easy meal. Cook chicken mince then add thinly sliced carrots, broccoli, capsicum, a few splashes of sweet soy - Kapis manis and some normal soy, then add a packet of bean sprouts - leave for a few minutes for them to cook down. Not long before serving add a packet of Hokien noodles. So yummy! I'm sure you could add other things too, but I just used what was in the fridge :-)
No comments:

This recipe is a great way to use up left-over roast chicken pulled apart, but I just fried up small bits of chicken and bacon. Steam lots of veges and cook and slice potatoes. Chuck the meat and veges in a dish, place the sliced potatoes on top, sprinkle with cheese and pour over a sauce of 1cup water, 1/2cup milk and packet of cream of chicken soup which has been boiled 2mins. Bake 20-30mins. i like it when you don't have to prepare separate veges!
1 comment:

Email ThisBlogThis!Share to TwitterShare to FacebookShare to Pinterest
Labels: ADELLE, Potatoes
Sausage Casserole
Adelle29 August 2012 20:10
I'm not a huge sausage fan but this is pretty good I reckon, plus 99% of kids like sausages...chopped up precooked sausages just covered in a saucey thing of boiling water, lots of grated carrot, onion, bit of malt vinegar, pasta sauce, curry powder, sugar and beef stock...in the oven for an hour or whatever and we just had it with rice and salad.
No comments:

Email ThisBlogThis!Share to TwitterShare to FacebookShare to Pinterest
Labels: ADELLE, Sausages
Pizza
Haidee Rich28 August 2012 15:46
I made pizza the other night using this quick and simple pizza base recipe - made two thin pizza bases - just right. I topped them with tomato paste, pesto, thinly sliced eggplant, mushrooms, thinly sliced green pepper, sliced cherry tomatoes, spinach, grated cheese, parmesan cheese, chilli powder and dried basil. I will definitely be making this again, making the base was so much easier than I had anticipated. Also, I sprinkled grits on the baking pan instead of oil to stop it sticking - this works really well and adds a nice bit of crunch = )
No comments:

Email ThisBlogThis!Share to TwitterShare to FacebookShare to Pinterest
Labels: Eggplant, HAIDEE RICH, Pizza
Pizza
Celia27 August 2012 20:13
We had smoked chicken and mushroom pizza with a spelt/normal flour base. Was delicious!
1 comment:

Email ThisBlogThis!Share to TwitterShare to FacebookShare to Pinterest
Labels: CELIA, Chicken, Mushroom, Pizza
Lasagne with spinach and chicken
Last night I made a lasagne that was inspired by a standard vegetarian lasagne, but I snuck in a little bit of chicken. I combined spinach, grated zucchini and small amount of finely chopped shredded chicken, mixed pasta sauce with tinned tomatoes, and layered it with the pasta and cheese sauce.
No comments: 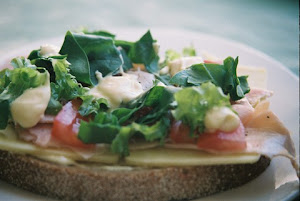 Return to The Cook's Sponge